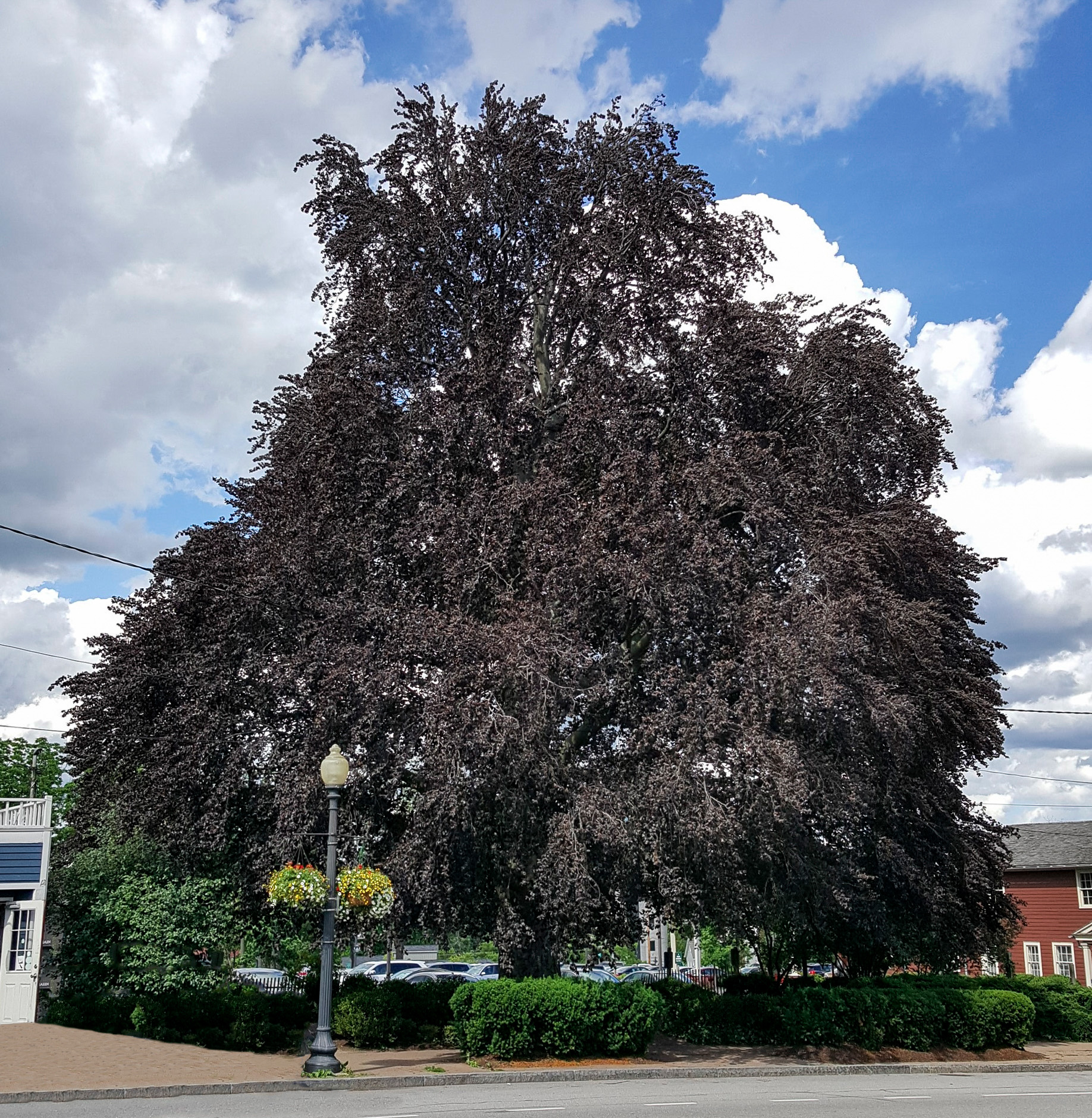 What better way to mark today, Arbor Day, then by planting the first of the trees graphed from healthy portions of the iconic Copper Beech Tree on State Street?

We bade farewell to the old Copper Beech three years ago, when disease made it too unstable to remain safely.  But before it came down, the Town collected healthy cuttings that have been cultivated in a nursery for the past few years. These are clones of the original Copper Beech!

The remaining saplings at the nursery cultivated from the Copper Beech, approximately 100 of them, are growing well and should be ready for planting next year. At that time, the Town will make these available to residents.

Today, with the planting of the first of the saplings to be ready, the Copper Beech lives in Pittsford once more.

Copper Beech Saplings Growing Along
When the iconic copper beech tree in the Town park on State Street succumbed to disease and had to be removed in 2018, the Town took steps to preserve its legacy.  Healthy cuttings from the tree were grafted onto rootstock, enabling them to grow over the past nearly four years into healthy saplings.  The young trees – actual clones of the grand old copper beech – are being kept at Coldwater Pond Nursery and are expected to remain there for another 2 - 3 years.  The Town received a recent update from the nursery, which reported that the saplings “have fantastic color and are the epitome of good health.”  Once the trees are established enough to be planted, they will be returned to the Town to populate our parks and open spaces. 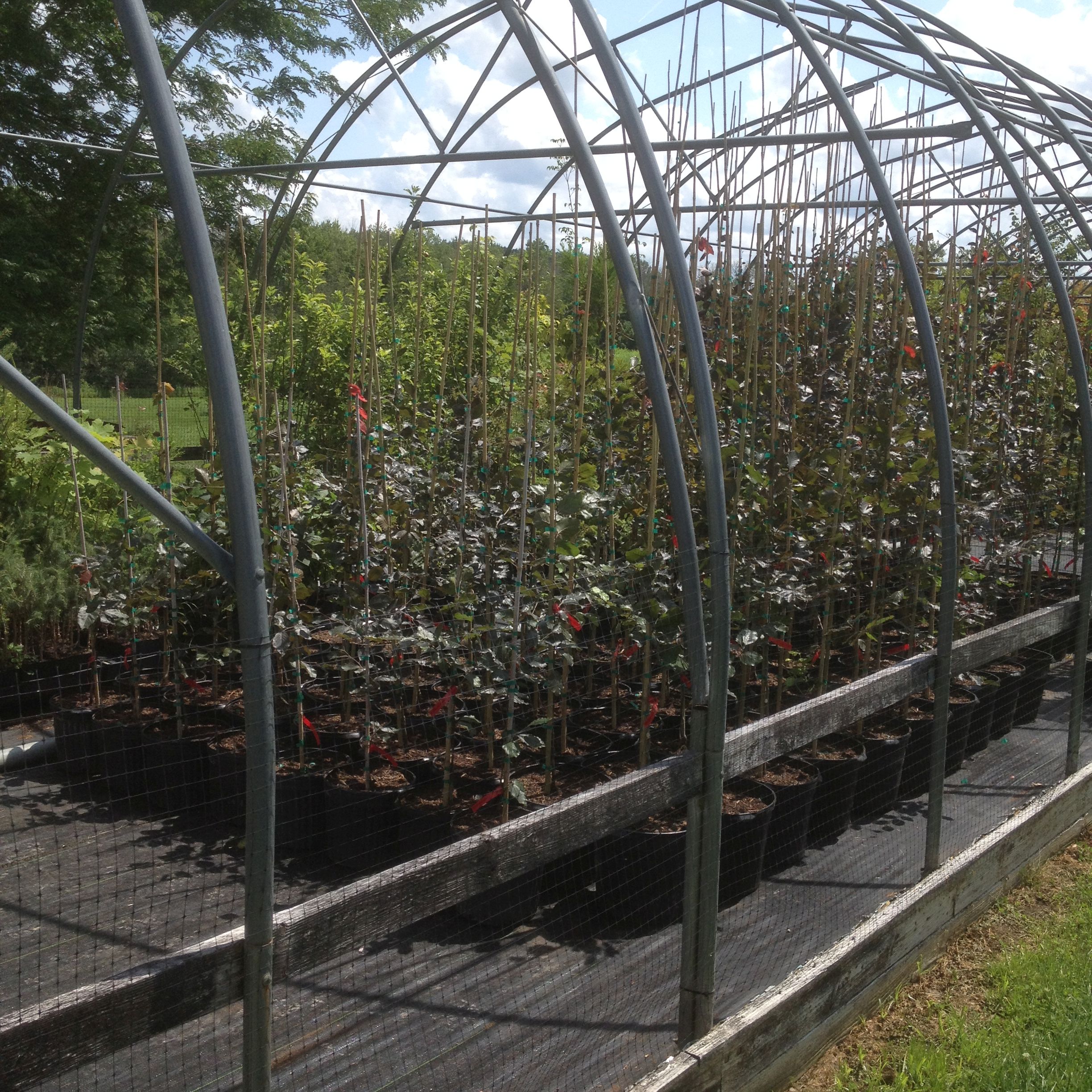 Farewell for Now to our Copper Beech Tree
The Town completed the sad task of removing our beloved but ailing Copper Beech tree on April 25, 2018. Inspection of the tree base confirmed the diagnosis made by arborist Dr. Chris Luley, president and pathologist of Urban Forest Diagnostics, and confirmed by Gary Raffel, a certified arborist with Genesee Tree Service.

As seen in the image below, there were only a few small sections of healthy wood left to hold up this massive tree which measured 5.8 feet in diameter at its widest point and weighed many tons. The bottom two pieces of the trunk – only a fraction of the entire tree – weighed over 7 tons. What we found confirmed our reasoning for removing the tree – the deterioration had progressed to the point where safety was a serious concern. 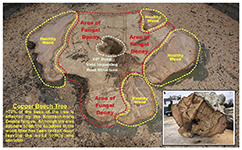 The decay in trees caused by the Kretzschmaria deusta fungus is somewhat unique in that the fungus creates holes in cell walls by degrading cellulose. This degradation reduces the tensile strength of wood and leaves the wood brittle. Seriously infected trees often snap off at roots or near ground level without the formation of significant hollows.

While we all mourn the loss of our Copper Beech tree, we honored it with a fitting farewell on "Copper Beech Day in Pittsford" (April 23) and plan to keep its memory and spirit alive as we redesign Copper Beech Park and cultivate the saplings it has left behind.

The Town had monitored the Copper Beech tree's decline since 2011, leading to the first assessment of the tree, which confirmed the presence of the fungus Kretzschmaria deusta. This fungus decayed the tree significantly from the inside, leaving the interior almost completely decayed. It was studied and tested by two prominent tree experts who ultimately recommended its removal. Since that time the Town did everything possible to save it. Yet the tree became physically damaged to the point that it poses a safety hazard. In 2015, a major limb of the tree, affected by the fungus, broke off and completely crushed a car parked behind Copper Beech Park.

Knowing the prognosis for the Copper Beech since its diagnosis, our Parks Department took great care to cultivate over 100 saplings from healthy cuttings of the tree. We’re currently working with the Village for a redesign of the park and have received advice from the Pittsford Garden Club.

Given the Copper Beech’s landmark presence in our community, we felt it would be fitting to conduct a public ceremony before its removal and did so on April 23, 2018. Many members of the community joined us for the farewell ceremony, during which Town Supervisor Bill Smith proclaimed the day to be "Copper Beech Day" and attendees signed a commemorative photo to be displayed in a prominent location within Pittsford.

Please join us for a public tribute and farewell Monday, April 23 at 6:00pm in Copper Beech Park, 14 State Street

By now, many of you have heard the unfortunate news that the Copper Beech Tree will be removed due to safety concerns resulting from the tree’s deterioration.

The Town has monitored its decline since 2011, leading to the first assessment of the tree, which confirmed the presence of the fungus Kretzschmaria deusta. This fungus has decayed the tree significantly from the inside, leaving it almost entirely hollow. It has been studied and tested by two prominent tree experts who ultimately recommended its removal. Since then we've done everything possible to save it. Yet now, the tree is physically damaged to the point that it poses a safety hazard. Several years ago, a major limb of the tree, affected by the fungus, broke off and damaged a car.

Knowing the prognosis for the Copper Beech since its diagnosis, our Parks Department took great care to cultivate over 100 saplings from healthy cuttings of the tree. We’re currently working with the Village for a redesign of the park and have received advice from the Pittsford Garden Club.

Given the Copper Beech’s landmark presence in our community, we felt it would be fitting to conduct a public ceremony before its removal. We hope you will join us at 6:00 p.m. this Monday, April 23 as we pay tribute to the historic Copper Beech Tree. The event is open to the public, so please feel free to pass along the information to anyone who may be interested. 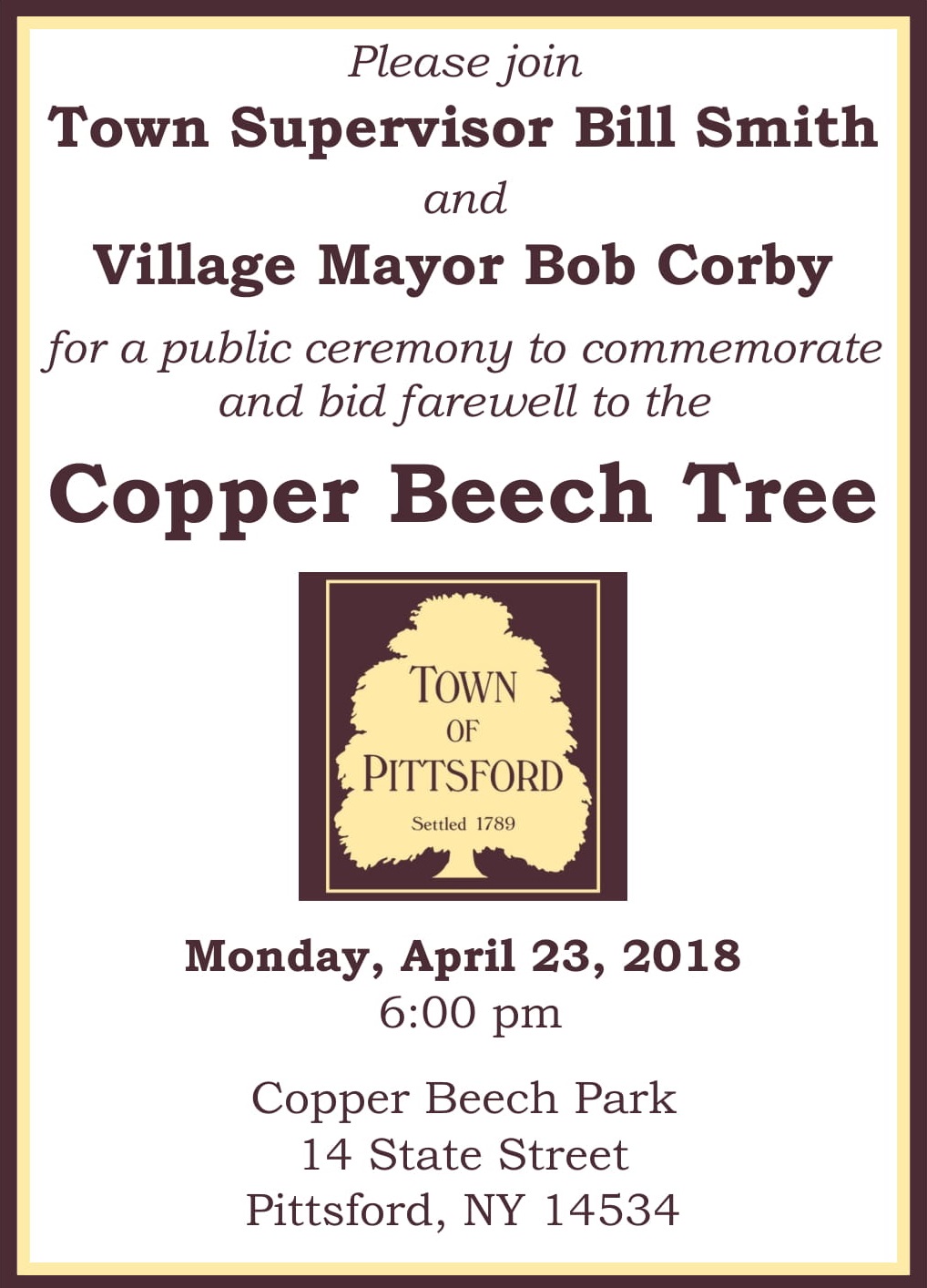 Ailing Copper Beech will live on via grafting project

One of the most familiar sights for Pittsford residents and those who pass through town is the beautiful and towering copper beech tree that has stood on State Street for centuries.  It is a tree that likely provided shade to travelers on Pittsford’s streets during its earliest days as a town.  Unfortunately, the copper beech has begun to succumb to old age and has been in decline.  An evaluation in 2011 by a professional arborist and tree pathologist disclosed that the tree is infected with Kretzschmaria deusta - a deadly fungus that causes soft-rot, killing a tree’s bark and wood and decaying the trunk and root system until the tree is unable to support itself.

Arborists have no cure for this fungus. Our Parks Department attempted to arrest the disease by treating the copper beech with an anti-fungal agent effective in managing another fungus that affects trees similarly.  This did not work.  The decay has spread.

After a large limb broke off last June, cables were put in place to provide support but this measure will not prevent further decline. Another test this April confirmed that the disease has spread in the trunk and in the root system. Our arborist recommends that the tree should be removed by 2020.  Out of concern for public safety, as we track progress of the disease it may become necessary or desirable to act well before then.

Knowing that our iconic copper beech is nearing its end, the Parks Department has worked with a local nursery to take cuttings from the healthy parts of the tree to graft onto living rootstock.  Many of the successful grafts have burst into leaf.  The young trees – actual clones of our grand old copper beech – will be there to replace the old tree once it goes, thereby starting a new chapter of the copper beech’s history in Pittsford.  You can check the Town’s website, Facebook, Instagram and Twitter accounts for updates on the copper beech. 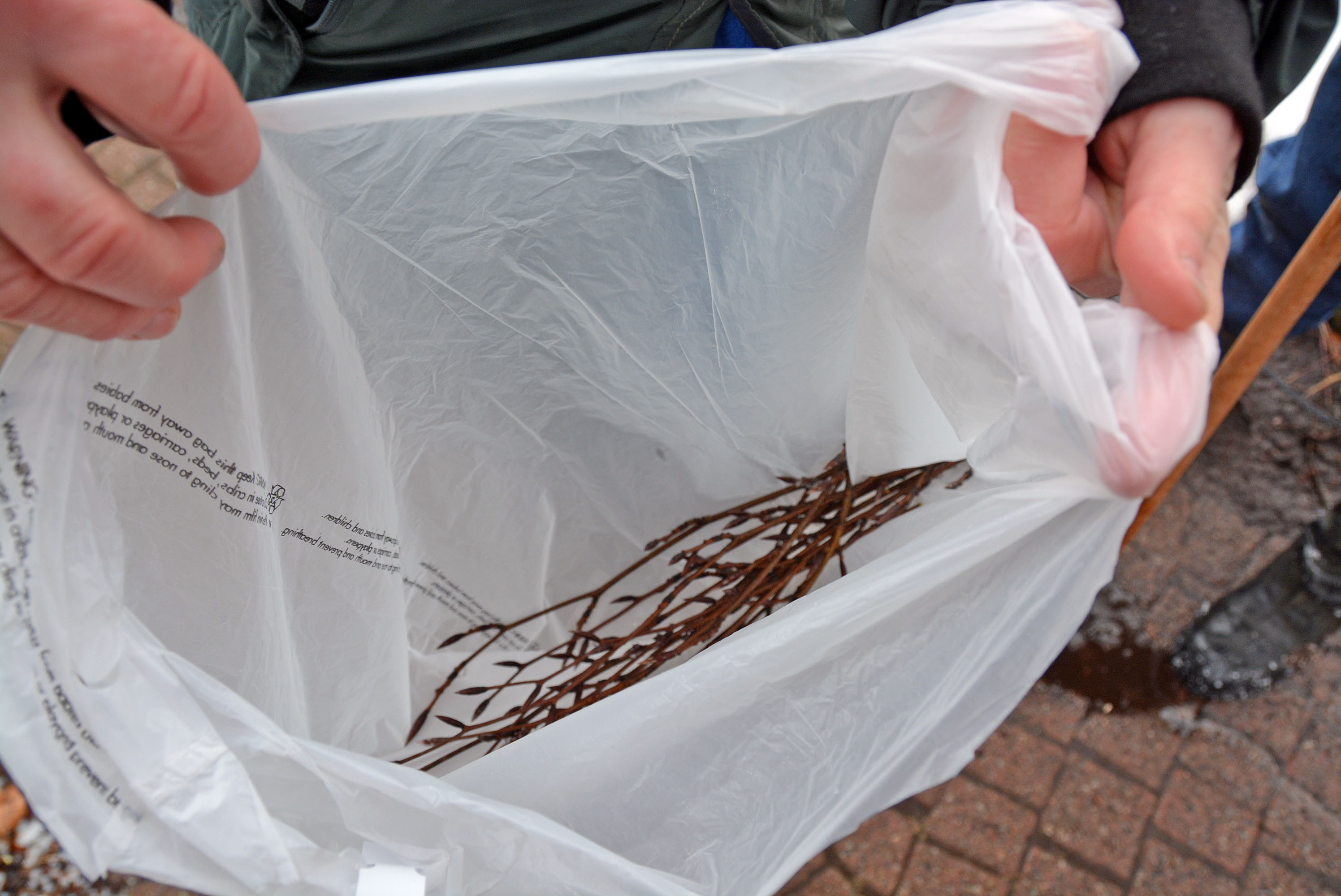