1.  Question:  What methodology and data did the Town, its engineers and advisors use to determine the need for parking at the renovated Spiegel Center?

We know how many people use the Spiegel Center and the current Senior Center and when they use them.  People must sign-up for each program.

A typical day during peak hours produces on average:

This represents people who currently use the Rec Center and who use the current Senior Center, which will be relocated to Spiegel.  These figures also include employees who must park there.

Across the day, the three time periods average out to about 172 people.  That’s people, not cars.

So, out of 172 people, we can expect up to about 22 to be dropped off.  (Half that in the evening, when we don’t have the young children’s programs, but we used the number most likely to result in needing fewer parking places, not more).  That leaves 150 people.  Understanding car usage habits as we do, we know that most of them will arrive one-person-per-car.  If we assume that about 25% of the remaining 150 will share rides or be dropped off or will arrive on foot or by bike, that would mean we’d need 113 parking spaces.

That assumption of 25% not arriving by their own car is the only part of this methodology that’s not driven purely by available data.  It represents a judgment based on experience.  Judging that 25% won’t use their own car may be high or may be low, but it seems reasonable. Based on the reality of how people use cars, that estimate that 25% of patrons will arrive without a car is likely to be high.

Be that as it may, it results in a need for 113 parking places.

The analysis set forth above does not take into account the likely higher enrollments for our rec programs due to having a new and attractive facility.  For that we’re counting on – and are grateful for – the Village’s plan to add 18 on-street parking places on Lincoln Avenue.

Our engineers cross-checked the calculation above by using another method to calculate the necessary parking.  The Monroe County Department of Planning and Development has published a statistical analysis of parking for community centers.  We’ll call it the “P&D Study.”  Its recommendations derive from analyzing the actual experience of nine different community centers of varying sizes. It focuses exclusively on community centers.  Not on other venues where parking is a factor.  Not schools or shopping centers or anything else.

The calculation prescribed by the P&D study calls for 110 parking spaces at the renovated Spiegel.

We undertook as well a second cross-check.  Currently, the Spiegel building offers 67 parking places.  The Senior Center, over at 3750 Monroe Avenue, has 60 places set aside and marked for its exclusive use, which are often full at the senior lunches four days a week.  Adding them together gives 127 parking places.  That’s how many parking places we provide now, at both venues collectively.

The Senior programs take place during the day.  That doesn’t mean that other Rec programs, held in parts of the building not used for Senior activities, don’t also take place at the same time.  In addition to Senior programs during the 9-11am hours and the 11am – 2pm hours, the Rec center offers, and will continue to offer in the renovated rec center, the following programs:  aerobics, child care, youth dance, adult ballet, community group reservations (usually for two groups on a typical day in each of the two time periods), and gymnasium programs including pickleball and open gym for parents and tots.  Based on recorded usages and enrollments, we know we can expect 175 people at the Spiegel building from 9 - 11am, and 180 people from 11am – 2pm.

The 127 parking spaces provided now (at two venues) is within striking distance of the 113 spots calculated by the method described above based on actual usage data for the Spiegel Center.  We resolved the difference against the higher number, not wanting to take any more of the green space behind the building than is strictly necessary.  We consider it reasonable and attainable to be able to manage the lower number of parking spaces than we provide now through program scheduling.

Thus, three different methodologies.  One calling for 113 parking places, another for 110, a third for 127.  These collectively take into account usage by different times of day, parking currently provided, parking usage, using program scheduling to minimize needed parking and the Village’s plan to provide additional on-street parking.

You can read about public vetting of the parking plan in the discussion under Question 3, below.

2.  Question:  How did the Town involve the public in the planning process for the Spiegel Center renovation?

The public processes detailed below involved extensive – often intense – discussion with and among Pittsford residents about programming and programming goals for our Community Center.  Those who participated in the many public meetings will recall this well.

Survey on Community Center given to voters at public referendum on Fields project on September 16, 2014 and filled out there.

From this point forward, all meetings where the Spiegel site plan was presented for public inspection and comment showed a parking configuration similar to the configuration on the most recent plan.

Three meetings open to the public held on:

Parks and Recreation Advisory Board Review:

Report of Town Board on Community Center – released July 20, 2016

Design plans including site plans presented at all meetings.

Presentation to Friends of Pittsford Village on Sunday, October 16, 2016

All published in publications below and, in addition, on Town website and in Town eNews.

Village of Pittsford Quarterly Newsletter – Fall 2016
Mailed to Village residents. Published by Village administration.  Discussed Spiegel project, citing exhaustive study behind it and that the plan calls for expansion of onsite parking.

Pittsford Messenger newsletter – Spring, 2017
Mailed to every home in Town.  Supervisor’s column mentioned progress on Community Center project.  A separate “Next steps for community center” article outlined anticipated timeline and next steps in detail and contained, again, information that all current plans could be seen on Town website.

Submission of Architectural/Engineering plans to Village for Review – May 15, 2017
By letter to Mayor Corby drafted May 17, 2017, the Town submitted for review a complete set of the architectural and engineering design changes for the Spiegel project.

3.  Question:  What opportunities for public review and comment  did the Town provide for the parking design, specifically?

Every version of the proposed Spiegel site plan presented for public inspection and comment, since early 2016, when the first renderings were prepared, has shown a parking configuration similar to the configuration on the most recent plan. (Except that the current plan - Version 3, shown below - preserves more green space).

The version used throughout 2016, including in all of the public meetings and events where plans were presented, and in all of the meetings soliciting public comment, and on our website, was prepared by Passero Associates. Here it is: 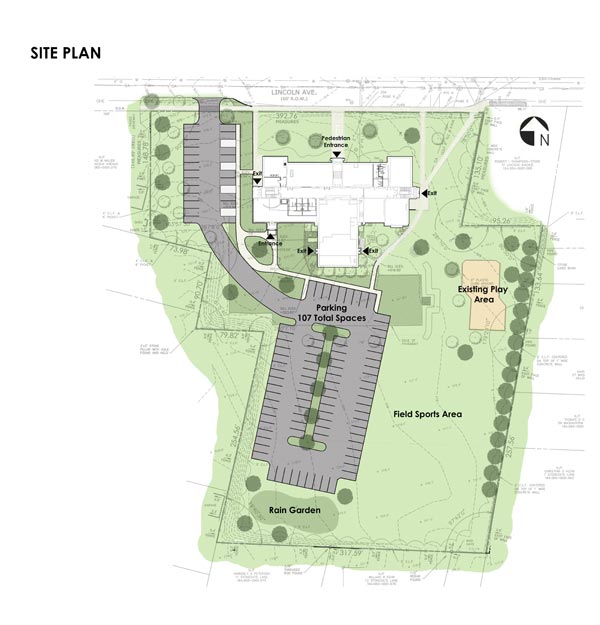 In early 2017, the Town brought on board HBT Architects, working in conjunction with BME Engineering for the site plan.  Throughout several early versions, the parking lot configuration remained substantially the same as shown on Version 1, above.  After several changes involving stormwater management design, the engineers furnished the following version in April 2017.  This the Town used in all public presentations subsequently, and on the website, until the next revision, discussed below.  Here is version number 2: 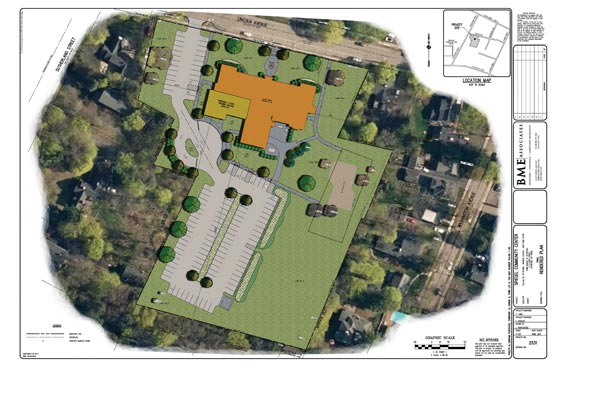 Version 2, shown above, was the version presented at the Public Information Meeting at Village Hall on Wednesday, May, 24, 2017.  Following comments at that meeting and subsequently, from Village residents and officials, the Town ordered further changes to the parking design.

Specifically, the significant revisions are:

An alternative plan substantially consistent with a design suggested by Mayor Corby, would have left open 1.2 acres.  However, that plan did not yield enough parking spaces, providing only 73.  Taking into account parking for the Senior Center employees, who now park at 3750 Monroe Avenue, and who will park at the renovated Spiegel facility, this represented a net loss of parking spaces for patrons at Spiegel, compared to what the facility has now. 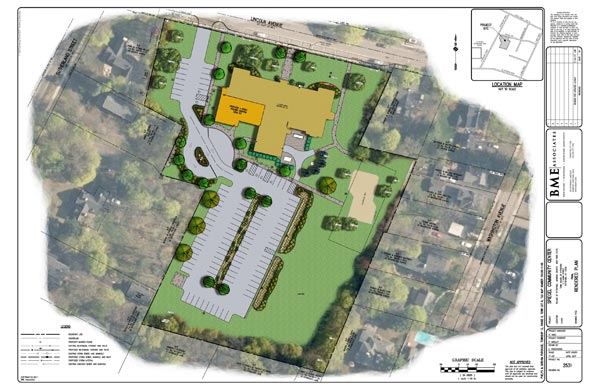 Throughout the period of all of the public meetings referenced above,  the Spiegel plans, as revised from time to time and showing the parking configuration, in addition to presentation at all public meetings, were also posted on the town website, with the web address or mention of web accessibility shown repeatedly in the town newsletter mailed to every home, in the Supervisor’s columns and in the town eNews.

There were numerous other presentations over the same period, to community groups, the PTSA, Pittsford Youth Services, the Senior Center and elsewhere, as detailed more fully in the discussion under Question # 2, above.

4.  Question:  Must the Town, as owner of the Spiegel Building and land, go through the Village planning processes?

The Town must submit to the Village, for approval, a Stormwater Pollution Prevention Plan for the site.  The Town is preparing the plan and will submit it to the Village.

Beyond that, the Town is not required to submit to Village approval processes such as the Village Planning and Zoning Board or the Village Architectural Preservation and Review Board.  The rule was established in the case Matter of County of Monroe (City of Rochester), 72 NY2d 338 (1988).  It held that the County, which owns the Greater Rochester International Airport, was not required to submit to the City of Rochester’s planning and review processes, even though the airport is located within the City limits.  The court prescribed a multipart test to determine whether a municipality that’s host to property owned by another municipality can claim jurisdiction.

In applying this test, the clear preponderance of cases decided in reliance on Matter of County of Monroe have found that the host municipality does not have jurisdiction.  Most recently, this was the outcome in Incorporated Village of Munsey Park v. Manhasset-Lakeville Water District, 150 AD3d 969 (2d Dep’t 2017).

Thus, when the Pittsford Community Library was constructed in 2005, no submissions were made to the Village Planning or Architectural Boards.

However, rather than focus on the legal distinctions, the Town and its officials have asked the Village government, both formally by letter in May of this year, and informally, for their comments and requested changes to the proposed Spiegel design.

To some of the requests there were unavoidable practical impediments.  Reorienting the parking lot from the proposed North-South configuration to an East-West configuration fell into that category, to everyone’s regret, because it could not provide adequate parking, as described more fully in the answer to Question 1, above.

5.  Question:  Why not reduce the number of parking places in the renovation, then add more later if they’re needed?

6.  Question:  Why move the Senior Center to the Spiegel Building?

7.  Question:  But doesn’t that mean that the renovated Spiegel Building becomes basically a Senior Center?

Not in the least.  There would have been no discussion of moving the Senior Center if it would have impaired our ability to stage the recreation programs that we wish to offer and that are consistent with our programming goals.  And there was a lot of discussion with members of the public, across the 3-year span of community engagement with this process, about programming.

How do we accommodate both?